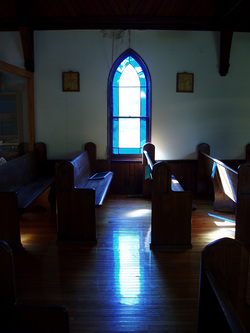 The Founding of St. Andrew-by-the-Lake
This wooden church was built in 1884 at a cost of $2,000. Mr. A.R. Dennison was the architect. A moving force behind the construction of an island church was The Most Reverend Arthur Sweatman (1834-1909) who later became Lord Bishop of Toronto, Lord Archbishop of Toronto [1907 - 1909], and Primate of All Canada [1907 - 1909]. The island church functioned as the Bishop's chapel-of-ease in the long summer idyll of the last century. Some of Toronto's leading families such as the Masseys and Gooderhams assisted in bringing about the establishment of the church during their summers on Toronto Island.

The Bishop's Cottage
The Bishop's Cottage (which later became the Rectory) was also designed by architect Denison and erected at a cost $3,300 in 1884. It too was out of wood and had the fanciful name of Happy-Go-Lucky. It was located right beside the church. The Bishop was an enthusiastic believer in the rus in urbe life that could be led on the Island. The Bishop's Cottage had a belfry-like tower of open-work beams that crowned the fret-sawn gable.

Architecture
The church architect created a semi-Gothic and Medieval variation on the Stick-Style that was generally used for cottages and summer hotels. Its plan, with chancel and nave, furnishings, and stained-glass-filled windows followed the established patterns of High Victorian parish architecture. [Source: Lost Toronto by William Dendy, 1993 p.49].  Between 1919 and 1921 large, magnificent stained glass windows were added to the church. These windows were designed and executed by the famous craftsman Robert McCausland.

Morning Prayer
As time passed and the congregation grew, Morning Prayer was started in 1895, with the service of Holy Communion on the first Sunday of the month.

Blessing of the Boats
Since 1949, the annual Blessing of the Boats is held in the lagoon behind the church. Boats of all sizes and shapes - mostly from the Royal Canadian Yacht and the Queen City Yacht Clubs - come to have their boats blessed by the St. Andrew by-the-Lake rector.

Church moved
In 1959 the church building was moved to its present location. To do so necessitated sawing it into two pieces. This was a tremendous undertaking, accomplished by experts, with no serious damage to the treasured windows.

1884  Church of St-Andrew-by-the-Lake is registered (as part of the Parish of St. James) by City of Toronto. The church is built on Centre Island (near the present Filtration Plant).  First service held on 27 July 1884.

1885  Chancel windows are installed by Robert McCausland and Co.

1895  Church is enlarged by moving chancel back and adding transcept, nearly doubling seating capacity to 210.

1919-1923  Three major stained glass windows are dedicated. The Crucifixion window on the East wall of the Transcept (opposite the organ) is a memorial to the 58 Islanders who gave their lives in the Great War of 1914-1918.

1945  Heating is installed in the church. Housing shortage in City increases the winter population of Island.

1949 The first Yachtsman’s Service is held; organist is Isabelle Gamble, our current organist. A choir association is formed.

1950 St. Andrew is declared a Parish of the Diocese of York.

1959 Rectory, Parish Hall and Church buildings are sold to the City Parks Dept for $22,978, and leased back to the Synod until such time as the premises are no longer being used as a church or if the building is required for municipal purposes. [Swadron Report 1981.]

1959-1961 The church building is moved to its present location. St Rita’s (the Island Catholic church) is also moved to a location near St. Andrew from its original location at 27 Iroquois Avenue on Centre Island.

1959  The original Rectory cottage and the Parish Hall are demolished and the Rector moves to the current Rectory (at the Algonquin Island bridge) which is owned by the Parish from 1960-1968.

1965  Father Paul Hopkins builds a winter chapel in the Rectory. In the room now used as a café, artist William Ronald paints a 100’ mural as decoration for the chapel. The altar now in use at the Church is built by Len Barnett.

1967-1974  Under the leadership of Rev Joseph Abbott, Chaplain of the Mission to Seamen. who lives in the City but commutes to the Island on Sundays, the parish endures a difficult period of turmoil and uncertainty. The parish is reduced to about 15 families.

1975 The church celebrates the centennial of the founding of the parish with a new bell.

1979 The church building is condemned by the City; the order is defied by Islanders who continue using the building for services.

1980-1984  Finally the church is abandoned and services are held in John Fowlie’s Island home.

1993  The decades-long period of uncertainty over Island homes is ended with the passage of the Toronto Islands Residential Community Stewardship Act by the provincial legislature.

1996 A second renovation project is carried out with volunteer labour. A new furnace is installed.

2003  The parish, with assistance from the Diocese of Toronto, completes a $40,000 renovation of kitchen and bathroom facilities, and renews the building for the future.